Financial Side Effects of COVID No One Talks About

Photo by Olga Kononenko on Unsplash

When Jennifer Boyce arrived home from a camping trip at the end of August, all she wanted was a shower and to catch up on emails. Instead, she came home to find her roommate sick with COVID, and getting sicker by the day.

Within just a few days, her roommate Beronica was in the emergency room, and less than 36 hours later, Beronica was on a ventilator, fighting for her life. She wouldn’t come off the ventilator for 15 days, at which point she couldn’t stand by herself or even raise her arms.

In the meantime, Jennifer found herself scrambling to be able to pay the mortgage, utilities, and quite literally keep the lights on. Beronica had “NEVER been late on a bill before,” Jennifer said, and as Beronica’s best friend for many years, she wanted to do everything in her power to maintain her friend’s winning streak, even as Beronica was incapacitated at the hospital.

5 Facts About How Exercise Helps You Live Longer

Since Jennifer rents a room in Beronica’s home, Beronica handled paying all the utility bills, the mortgage, and all of her personal bills. Jennifer launched a search effort in the house, through filing drawers, scouring the mail, even looking through Beronica’s phone (fortunately, Jennifer knew the phone password). “It was a scavenger hunt,” Jennifer admitted, “and it definitely added to the stress” of taking care of Beronica. “Luckily, she keeps a journal, and writes down most things there. She lists different utilities and the amounts… [and] I at least knew when her work paycheck would come in since we work at the same place.” After about three hours of searching, Jennifer felt ready to pay the bills. She started with the utilities, calling several of them to try to pay the bill. 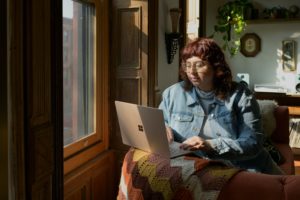 Photo by Surface on Unsplash

Jennifer recounted her frustration with being stonewalled by company after company, despite spending hours on the phone trying to pay bills. “I would call and they wouldn’t even tell me how much the bill was,” since she wasn’t on the account. “I’d say, ‘so I can pay the bill, but you won’t tell me how much it is?’” Jennifer said the people she talked to were sympathetic to her situation, but also bound by privacy rules, so her access was very limited. In the end, she sometimes had to estimate the amounts based on previous bills listed in Beronica’s journal, just to make sure the bills got paid.

Even though Jennifer had Beronica’s phone password, she wasn’t able to access the apps to pay bills, since Beronica’s face wasn’t there for face ID, and only a few of Beronica’s passwords were in her notes, though she was able to guess at a few.

In the meantime, Jennifer herself contracted COVID, which made navigating the financial piece even more challenging, as she was sick and still trying to manage everything. She finally decided to impersonate Beronica on the phone, which gave her a much higher success rate in managing Beronica’s accounts. The entire time she was handling Beronica’s affairs, “only one account got missed, and even that one only got paid one day late,” Jennifer said, adding “Beronica wasn’t happy about it, but of course she understood.”

Photo by Chanhee Lee on Unsplash

Beronica finally left the hospital after about 30 days, and moved into her sister’s home for another month of recovery. Now, four months later, Beronica is able to work from home full-time, but still has to take naps midday due to long COVID fatigue.

Beronica and Jennifer are now working on organizing everything for the future. Beronica “luckily was organized and I kind of knew where to look,” but Jennifer freely admits that “if she hadn’t been organized, it would have been a much bigger problem.” Jennifer was referred to Easeenet, a company that offers a unified solution to organize all her critical life details, from account information (including usernames and passwords) to documents and life details (phone password, medications taken, important contacts) that people often forget to pass on. She quickly started getting everything in place, since having a tool like Easeenet sooner “would have been extremely valuable, just to have the peace of mind” and avoid hours of frantically scavenging for information. Jennifer helped Beronica set up an account too, since Beronica is still a little overwhelmed from her ordeal.

Jennifer acknowledges that many aspects of her and Beronica’s story were made easier since they are best friends, live together, and Jennifer was able to temporarily impersonate Beronica when needed. If it had been her dad who suffered a health issue instead, since she doesn’t know his details like she knows Beronica’s, “that would be a nightmare, I don’t even want to think about it!”

How to Become an Effective Speaker

The Power of Pooping by Susan Wong with John Rietcheck

Erin is the cofounder & CEO of Easeenet.com, a digital estate planning tool combining a password manager and digital vault. A tech nerd and scientist at heart, Erin always drives to identify the most elegant, efficient way to optimize solutions and strategy. When not working, Erin loves to cuddle with her daughter, cook, travel, and read.

5 Facts About How Exercise Helps You Live Longer

The Power of Pooping by Susan Wong with John Rietcheck