“Gone Girl” by Gillian Flynn is perhaps the most incredible feminist portrayal of our century and even more spectacular, is the 2014 movie adaptation of the same title directed by David Fincher. While this movie has been praised for its carefully selected and very inclusive cast members, there remains no drug more addictive than the revenge of a cheated wife.

The movie stars Ben Affleck as Nick Dunne and Rosamund Pike as his wife Amy Dunne. Amy goes missing on their fifth wedding anniversary and all “clues” lead to Nick as the culprit. The police find poorly concealed evidence of physical and emotional abuse by Nick against Amy and doubts begin to surface. The husband is always the suspect when the wife goes missing or is assumed dead, it doesn’t take long before the press starts pointing fingers.

Nick is not innocent of all their accusations, but without a body, the police find it difficult to make an arrest. He was violent, he didn’t want kids and forensic analysis reveals that a large portion of Amy’s blood was mopped poorly from the floor in the kitchen. Nick continues to insist he is innocent and soon gets a lawyer when the heat gets hotter.

He conceals that he has an affair with one of his barely adult students, that he sleeps with her after his wife goes missing and he had plans to divorce Amy on their fifth anniversary. These would all have confirmed their suspicions and medical reports show that Amy was pregnant before she went missing. TV Host Nancy Grace, played by Missi Pyle, implies that Nick killed his wife because he is in love with his twin sister. 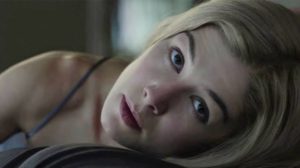 But Amy isn’t dead. Her murder was staged.

She falsifies a representation of her marriage with Nick in a diary. She leaves breadcrumbs to frame Nick for her murder and her plan works out perfectly. She leaves Mississippi for the Ozarks. She keeps tabs on the coverage of her murder and enjoys seeing Nick make mistakes with the press. Something goes horribly wrong with this plan and she is forced to frame and kill someone else to get home.

The scariest scene in this crime thriller of “Did he do it or did he only do some of it?”, is where we see Amy cut a guy’s throat open while having sex with him. She makes sure the bleeding, dying body ejaculates in her, before she rolls off him. If that doesn’t make guys think twice before marrying a hot beautiful writer, I don’t know what will.

The Gone Girl movie was released in October 2014. It earned Rosamund Pike (Amy) an Academy Award nomination for Best Actress in the same year and got an 87% approval rating on Rotten Tomatoes out of 365 reviews. It was widely appraised by The New Yorker, The Economist, Slant Magazine, New York Daily News and was among the top 10 movie list on multiple magazines. Gone Girl still remains a favorite for most crime fiction lovers and nobody writes about hot female villains like Gillian Flynn.

Yet in the opinion of this writer, the movie could have been longer. Unlike the novel originally written in 2012, David Fincher’s version only gives us an unreliable narration from Amy and leaves us wondering what Nick is really thinking. We find ourselves stuck watching a shaky sequence of confusing drama, that if one hasn’t read the novel beforehand, it becomes difficult to understand without watching the movie twice.

The Future of Facials- SPF

Chris Level- His Mental Health And Relationship With Music

Paws of War Ramps up Efforts to Save Animals Left Behind