Since the release of the popular Netflix miniseries “Inventing Anna” on 11th February 2022, the world has been buzzing about Anna Delvey. Most people like this writer, find it almost impossible and in fact, mind numbingly fictive that a 26 year old German immigrant to the U.S was capable of fooling a Yale trained real estate lawyer like Andrew Lance (Alan Reeds) into representing her, con New York’s elite out of hundreds of thousands of dollars, steal a private jet and all-out hustle her way into Warren Buffett’s secret VIP party, all without breaking a sweat. It comes as a shock to Netflix lovers everywhere; to find out this series is actually based on real life events.

Produced by Shonda Rhimes, the series of nine episodes is based on the 2018 New York Magazine article titled “How Anna Delvey Tricked New York’s Party People.” by Jessica Pressler. In this article, the then pregnant Jessica (Vivian Kent) writes about a 25 year old ‘wanna be socialite’ who had apparently tricked everyone into believing she was a ‘German heiress’ with an extremely rich father. ‘She looked and spoke in an accent that sounded European’, tipped with 100 dollar bills and never apologized. People thought she was the real deal and she scammed them hard.

Pressler (Anna Chlumsky as Vivian Kent) had written this story in May 2018 and by June the next month, Shondaland bought the rights to create “Inventing Anna”.   The Netflix version of the true life story introduces Anna Delvey (née Sorokin) to us in jail, under charges of committing financial fraud in the millions. Manhattan Journalist Vivian Kent, who is desperately looking for a story to revive her dying career, picks an interest in a not so famous story about Anna and goes to Rikers Island in New York to speak with her. Anna appears to be snobbish and her portrayer surprised many Hollywood viewers who instantly recognized her as  Julia Garner, the Primetime Emmy Award-winning actress from Ozarks, Dirty John and The Assistant (2019). It was originally announced that Madeline Brewer from Orange Is The New Black (2013) would be playing Anna, but ‘due to scheduling conflicts’, Madeline passed on the role. 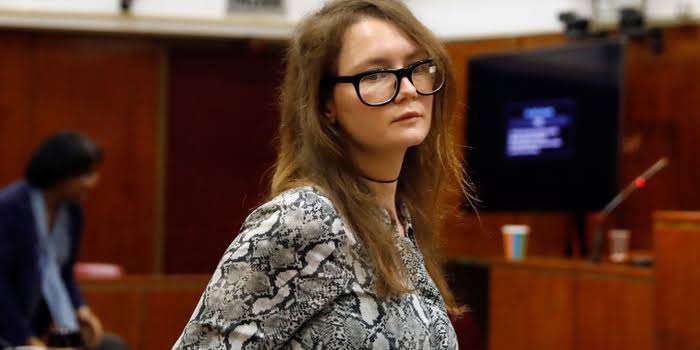 Anyways, during an interview at Rikers, Snobbish Anna ridicules Vivian’s outfit and goes as far as calling her poor and dressed down. The insult only convinces Vivian the more that this is the right story she has been waiting for. She tracks down every lead, source and public record she can find. She slowly discovers that Anna’s trickery didn’t start overnight and she has a long list of fraudulent activities going back months in Los Angeles, New York, Morocco and other cities. She meets with Val (James Cusati-Moyer) the well known New York fashion designer, Chase Sikorski (Saamer Usmani) Anna’s boyfriend, Alan Reed (Anthony Edwards) the lawyer who tried to help Anna secure funding for her socialite foundation and Anna’s friends; Neff (Alexis Floyd), Rachel (Katie Lowes) and Kacy (Laverne Cox) who all have different impressions of Anna. “It’s like they’re talking about different people,” Vivian says. The story took a twist mid-season and like all real life events, It soon had viewers arguing among themselves; ‘is she really rich? She sounds rich, acts rich and lies rich, but I don’t think she’s rich.’

With so much ruckus about whether or not Anna was a hero or a villain in the series, Twitter went crazy with hashtags about Inventing Anna. Fans were supporting, opposing and even changing sides all over social media when discussing Anna. One fan said “Shonda really had me rooting for the wrong team. I honestly wanted her to get that loan so badly. I get she’s a fraud but this girl put in the work. The game is the game.” Fans of the 2018 British drama spy thriller “Killing Eve”, also had a lot to say about Anna’s German accent. One posted “I don’t know if I can get passed this accent. At times it’s German, then Russian, then I hear a twang of American Southern… She was the baddest”.

Anna Delvey’s story has everything; romance, suspense, power, intrigue, gas lighting and more. It’s no wonder Shonda Rhimes was in a hurry to produce the series. In an interview with Vulture, Jessica Pressler describes how Shondaland contacted her .“It all happened really fast.” She says. “Rhimes reached out to [me] about a month or so”. Pressler had just given birth following the completion of her article. “I remember they reached out pretty soon after I had gotten home from the hospital, or maybe even while I was still in the hospital, in June 2018” .

The show would go on to hold a 62% approval rating and a joint consensus that while Inventing Anna is as tonally wobbly as Julia Garner’s intentionally daffy accent, her committed performance and the salacious story make for juicy entertainment. – Rotten Tomatoes. Anna Sorokin received a total of $320,000 from the producers for a right to tell her story. Yet, despite the rigorous amount of fact checking, discovery and years of production put together in the telling of this story, New York Times reporter Emily Palmer records that “the writers [still] pay little attention to what true or at least ethical reporting looks like”  even after having Jessica Pressler as one of their producers.”

There have been concerns about the authenticity of the Netflix miniseries when compared with what happened in real life.  Media VIP visits at Rikers Jail Complex, Anna’s outfits in court and Julia Garner’s accent while playing Anna, are among the list of inaccuracies the other 48% of Inventing Anna critics point out as misleading. One correct depiction in the series is recorded towards the end of Pressler’s 2018 article.

“’The thing is, I’m not sorry,’ she told me at the Rikers Island jail complex the day after a judge sentenced her to 4 to 12 years behind bars for charges including second-degree grand larceny, theft of services and one count of first-degree attempted grand larceny. ‘I regret the way I went about certain things.’”

Till the very end, Inventing Anna portrays a spoiled, unrelenting character who insists she is the daughter of a Russian billionaire living in Germany, despite evidence to the contrary. The mix with characters and the movie protagonist Vivian Kent (Anna Chlumsky), presents one of the very few  examples of what honest dedicated Journalism looks like. Aside from the changed name of the magazine she works under and the character’s name, the producers believe Vivian Kent is exactly Jessica Pressler in real life.

The real Anna Delvey is currently 31 years old and has been held up for a year in ICE detention where she is fighting deportation back to Germany. She was released after serving almost four years of her 2019 sentence and is in ICE custody for overstaying her visa. She can be found via her handle @theannadelvey on Instagram, which has been active since 2013 when she made her first post from Paris. Despite everything that has happened to Anna, she continues to claim that her plans were entirely legit.

Celebrate Passover 2022 With Wines From Israel