There’s this very interesting definition of entrepreneurship. It’s like living a few years of your life like most people are not going to, so you can spend the rest of your life like most people cannot. Your journey won’t be easy but it will be abundantly rewarding. In the end, it will be worth it, as it was for Maya. Maya Miranda Ambarsari is a mother, entrepreneur, lawyer, philanthropist, and the founder of Rumah Belajar Miranda. She is an accomplished businesswoman in Indonesia. With her balanced approach to philanthropy and entrepreneurship, she is a role model to all the millennials out there. She is currently providing her professional services as a President Commissioner in the Teknologi Cakra Internasional, that further manages different prodigies under its umbrella, like Arthology.id, Interconnect Data, and Hamparan Sukses Mandiri. Additionally, she is the co-founder and shareholder of PT Merdeka Copper and Gold Tbk, a gold mining company she founded with her husband, Andreas Reza. The company engages in exploration and production of gold, silver, copper, and other related minerals.

Maya Ambarsari began her professional career as a lawyer in Jakarta after graduating from Pancasila University. But soon she realized that just being a lawyer wasn’t enough for her. She wanted to explore more prospects in her life. Her interest in business grew as she learned more about it. She decided to pursue a Master’s degree in International Business at Swinburne University of Technology in Melbourne. During her time in Australia, she learned a lot about life. During her time in Australia, she became a more independent person. She also discovered that her real passion was international business. Because of her ability to connect with people from different backgrounds, she was able to open many doors in the corporate world.

When Maya Ambarsari returned from Australia, she worked as a lawyer for a while in order to gain some more experience. She launched her first business in the telecommunications industry. Later she became involved in PT Tawu Inti Bati, an oil refinery, PT Merdeka Copper and Gold Tbk, Elliottii Residence, Gorjes Hair Salon & Lounge. Toward the end of 2019, she included Batamec Shipyard in her portfolio.


As well as her extensive business portfolio, Maya Ambarsari  is also known for sharing her blessings with underserved communities. Maya has converted her family’s home into an education center for 800 children in order to help them live healthier, safer, and more fulfilling lives. Rumah Belajar Miranda (RBM), an educational institution in South Jakarta, shares its name with Maya Ambarsari’s mother. Through RBM, Ambarsari makes a charitable contribution to the community. Her late mother, who was the chairman for an Islamic study group in the neighborhood, initiated the project. Maya took over the project after her mother passed away. She later decided to set up a center for education there to create more impact – not only for mothers, but for children as well.

The idea for this came from her daily routine of walking to Cipete Market to buy groceries. She saw many school-age children waiting for their parents in the market, who were buying and selling things. Some of them just wandered around aimlessly. This also caused them to miss classes. After becoming concerned about their situation, she began to think about what she could do to help them.

To turn part of their house into an education center, she asked her father and husband’s permission. With their consent, an Islamic study group was started. Students soon began to flock to this class. After receiving such a great response, she decided to initiate more classes, including mathematics and English; both reading and writing. She opened a library, launched a school for toddlers, and formed a religious music group as well.

Working at Teknologi Cakra Internasional and overseeing its high level management, Maya soon realized they needed a prodigy company to be able to accommodate the market’s ever growing demands. Hence, Interconnect Data was launched. It helps entrepreneurs discover authentic business information that is relevant to their niche. It utilizes real-time data analytics from voluminous and accurate databases to serve as a matchmaker between a company, its partners, and potential job seekers. Many emerging brands have used it to distinguish themselves from their competitors and become empires in the future. The service provides detailed information about businesses, startups, business partners, and professionals pertinent to your interests and needs. Having accurate data and information at every step helps you achieve your business goals faster. To date, the brand has worked with large companies such as Indonesian Stock Exchange, Statista, S & P Global, and more.

Maya’s childhood was filled with the desire to do a lot of things and to prove herself to everyone. It is always for the greater good that she starts a new business. She wants to make a positive impact. In her daily prayers, she hopes that everything she does will bring blessings to everyone. Her success in male-dominated industries makes her proud. In her opinion, anyone can achieve whatever they want. Her response when people ask her what makes her so passionate about being in so many different businesses is that it comes from her eagerness to learn. There are a few management methods that are more or less the same regardless of what industry you are in. It’s just the matter of placement and knowing when to take what decision.

It is Maya’s goal to fill her life with kindness, and she doesn’t want it to stop. Through spreading more kindness, she plans to make this a permanent part of her life. She believes that one of the ways to make our lives more meaningful is through sharing. Sharing makes us feel happier. When she was growing up, her parents taught her about the Javanese philosophy of Hasta Brata, which defines leadership in terms of eight natural elements. After a while, she realized how it affected the way she interacted with others. In addition, she realized that God wants us to be purposeful. There are those of us who are destined to start up businesses and create jobs, while others will be doctors, engineers, politicians, or religious leaders. It has been her experience that each of these paths in life has had a positive impact on society in a unique way. In the future, Maya hopes to expand her businesses to create more jobs, so more people can earn a living to provide for their families. Her goal is simply to make people’s lives better. 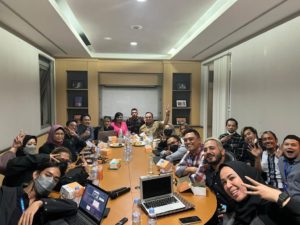 5 Traits That Are Vital to Thrive As An Entrepreneur

Abdullah Raaj is the founder of Ventures Bite, a global digital marketing agency. He is a serial entrepreneur and an expert in the field of Development and Marketing, and is considered a “Marketing Specialist" by his peers.

Venciel - The Exclusive Clothing Brand With a One Year Waiting List