When Samantha Maldonado, Julie Khanna, and Jerome Jackson realized Lunch Hero Day was amongst them, they wanted to do something to honor the staff, and their moms, who were longtime Starlight Cove lunch heroes themselves. Charlene Khanna, Dee Smith (Samantha Maldonado), and Sylvia “Regina” Jackson were amongst the inaugural lunchroom staff when Starlight Cove Elementary, located at 6300 Seminole Dr, Lantana, FL, first opened in 1995.

Dr. Seku Gathers Explains Most Significant Mindset Limiting Beliefs that New Life Coaches Have and How to Fix Them

Train Frontman Pat Monahan on Love Someone: A Podcast With Delilah

Knowing how hard their mothers worked during their time as lunchroom ladies in the cafeteria, they wanted to do something special for the ladies while honoring Charlene Khanna, who passed away during her time at the Starlight Cove Elementary after nearly twenty years of dedication.

In 2014, Charlene called her daughter from the cafeteria to tell her daughter she felt off at her coworker’s prompting.

“She said she felt a funny feeling in her leg. My mom was a stoic woman. She didn’t want to alarm any of us. But that night, we learned she had stage 4 cancer. It all happened so fast,” her daughter Julie said.

“Coming back to the school is a full-circle moment in so many ways. There’s just so much history here. We grew up in this cafeteria. Then when my daughter Lillian was born, she became everyone’s pride and joy. It’s like she had a bunch of grandmas here, and each of them spoiled her. So being back here with Lilli, honoring my mom, these heroes, feels so nostalgic,” said Khanna. 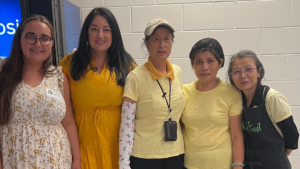 Their turn to be spoiled, the lunchroom staff of 13 gathered in the school’s lounge, decorated with yellow balloons brought in by Maldonado and banners signed with endearing messages from the students. Plated Mahi Mahi, conch chowder soup, and mixed veggies were brought in one by one and hand served by Executive Chef Pascal Georget and Chef Andy Diep of Seminole Reef Grille.

The women passed around old photos of Charlene in the cafeteria with Julie and Lillian. Those that worked with Charlene shared reminiscent stories of Charlene’s compassion, leadership, and strength. Newer faces listened and shared in the excitement. 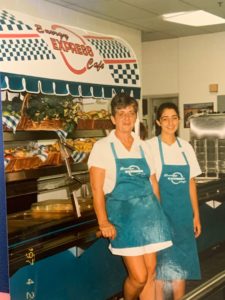 “My (grand) mom was a big part of this community, and I don’t want anyone to forget her. She loved the kids and her coworkers. They were her sisters. Today was a way of serving those that spend their days serving so many, the way she did, “added Lillian Khanna.

Dr. Seku Gathers Explains Most Significant Mindset Limiting Beliefs that New Life Coaches Have and How to Fix Them

Train Frontman Pat Monahan on Love Someone: A Podcast With Delilah

Finland Has An Education System The Other Country Should Learn From